← Unreal love and roots of woundedness … “babies having babies” … parental love. This is what the planetmates reveal today
The Planetmates on real love, the “love contract,” adorability in infants, parental “love”: “Love” is often just a swirl of ritualistic craving and trickling satisfaction set in motion by keenly felt but supremely denied hurt.” → 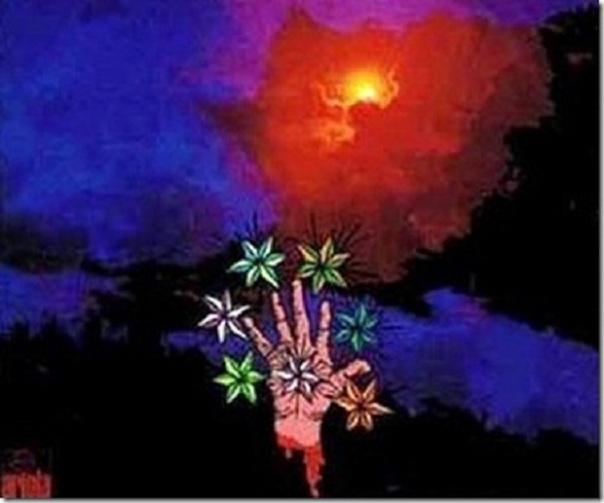 “…You wish to turn your infants into the parents you wished you had. You love your children to the extent that they hold out the hope that they will become that — your longed for parents. But, no, you cannot bear the thought that your love is tainted with selfishness this way.

“Still, can you notice how this kind of parental love becomes the template for all that you see to be love? We have described how you have created your gods in the image of your parents in infancy — making them capricious, as your parents were, and yet potentially nurturing (if only you could be a certain way) as you wished they had been. Do you see that you view all your relations, and your love, through the veil of these deprivations?

“You choose your lovers and mates out of these same deprivations: You are drawn to those who are imperfect and capricious in their caring — in a way matching or reminiscent of what you received in childhood and infancy — but you pick them out by seeing in them the behaviors and ways that for you are a hope that you will actually get what you needed long ago. You pick out partners who are imperfect in a way similar to what your parents were, so that you can continue the unreal struggle — which you failed at as an infant — to turn these imperfect people into the kind you really need. This struggle is rooted in an understandable reluctance to accept that what you got was not only less than ideal, but was traumatic. So ever after you try to make those events as if they did not happen — which is an impossible and unreal struggle.

“So, to the extent that your adult partners do not match up with those hopes for them to be what you needed back then (and think about it, how can they? … being both like your parents but you’re thinking they will not be like them) you seek to change them in ways that they will be the end of your lonely years of yearning and unfulfillment. So you see your adult loved ones and partners the same way you see your infants and children: You seem in them what you need and you seek to make of them that which will lead to the healing of those long ago hurts.

“And so you are ever doomed to failure. You cannot change people into who you want, any more than you could your parents. In fact, a characteristic pattern of humans is for you to begin having infants at exactly that point in a relationship with a partner — in a marriage, for example — when one realizes that one is going to fail at turning that person into the longed for parent. It is no coincidence that one’s attention will go, at that point, toward seeing if those long ago hurts can be quelled through an infant instead … or, for some people, through another lover … and thus you have infidelity or serial monogamy.

“In this situation, the spouse does not satisfy, or quell, those pangs emanating from hidden and long ago deprivations, so babies and children are wanted, or another lover. Later, when the child comes up short … and it will because a child cannot be a parent, really (I mean, seriously now) … people often turn to religion to continue the unreal struggle to satisfy those needs. That is why humans often turn to religion later in life, seeking to find in the Phantom deity what they failed to find anywhere else in life. They come to religion after exhausting all possibilities for correcting an injustice which happened long ago.

“When religion also fails, that is a time when one might possibly be open to hearing us and facing the truth that one cannot make of one’s life whatever one wants. That life is full of pain, disappointment, and injustice.

“And not that that is right or okay, but simply that it is not that big of a deal: Life is magnificent whichever way it goes. For whether struggling to be free, pushing against limitations, strengthening oneself and alternating between frustration and accomplishment, it is all experience, it is all marvelous adventure.

“The purpose of life is not the to reach the goal, for it takes many lifetimes to return to divinity. And in the meantime, the goal is not even what would be desired. For the journey is all. And it is in making mistakes that one continues the journey. The imperfections of life are the rails upon which life’s journey rolls along. They are necessary, however much at some point you will want to go beyond them.

“At any rate, when it comes to seeking satisfaction of early deprivations in others—whether romantic partners, children, or the Phantom in religions—you are doomed to failure. For you cannot remake people. In addition, you cannot satisfy those needs of long ago, not fully, even if you do get in the present what you needed then. You cannot undo a wound by not getting hurt again in the present. These early deprivations are a wound upon which and around which you have built your personality and your entire life plan. It has been cauterized and set long ago. So, you cannot rid yourself of it, and the ache of it, by simply not being further wounded.

“Certainly, you are better off by not drawing to yourselves, as you will, those who will continually reopen that wound, who will continually mimic the primal events and retrigger the pain. But, like you express in your myth of Prometheus, this is a wound that will never heal; it becomes you; it is the wall you get to push against in life in order to build up your spiritual “muscles.”

“But, you can at least progress in life beyond the unconscious and tedious re-creation of hurts and re-invigoration of old and hurtful patterns. It is better to not draw to you that which will continually trigger you, but you cannot do that by denying your woundedness. And it is for that reason — in order to stop the cycles of hope and then hurt — that it is better you face and embrace your woundedness. For in denying and repressing it, you are forever doomed to recreating it. By reversing that separation from body and, feeling the body and its aches and pains and urges again, reconnecting with your woundedness, re-member-ing yourself, you have at least the knowing making you capable of choosing something different. In this way you can free yourself.

“And the more you re-member yourself, the freer you can be. That is the true “transcendence”: It is one rooted in a re-feeling of and re-membering of the hurts and pains in one’s body that is left over from the past and not a separating away from and a denying of that stored pain … as if one is above body and Nature … and confusing that self-congratulation and ego aggrandizement with enlightenment….”

To see the entire book, to which this will be added eventually (book is two-thirds updated), go to the blog page at http://mladzema.wordpress.com/the-great-reveal-book-6/ … Planetmates: The Great Reveal is also scheduled for print and e-book publication in mid-March, 2014

← Unreal love and roots of woundedness … “babies having babies” … parental love. This is what the planetmates reveal today
The Planetmates on real love, the “love contract,” adorability in infants, parental “love”: “Love” is often just a swirl of ritualistic craving and trickling satisfaction set in motion by keenly felt but supremely denied hurt.” →