“Little did we know that every moment of every day we were immersed in it, in God, in Experience, and we were not, nor were we ever, separate from it.”: The Mind’s True Liberation

“…that pool of experience is connected with the entire Universe, which is all Experience. We are one with it. And it is God. God, certainly, different than the way w e pictured it. Being separate ourselves, we pictured another being. Little did we know that every moment of every day we were immersed in it, in God, in Experience, and we were not, nor were we ever, separate from it.”

– from Funny God: The Tao of Funny God and the Mind’s True Liberation


See also, Experience Is Divinity: Matter As Metaphor by Michael Adzema at

The Nature of Us and God: “We are God … all of it … choosing to be lesser at the same time … to magnify the glory of it all … to make it more fun….”

“Individual waves on an ocean … single leaves on a tree….”

“Each of us is like a bringing together of pieces from the jigsaw puzzle of all experience, in a way that suits us, the magnet. We are fields — that’s another way of looking at it — we are fields overlapping and intermixing and potentially expanding, in an instant, to include all of Reality … and to have the experience of “God” … of being God.”

“With total freedom you might have something equivalent to being able to see yourself as the individual leaf, or yourself as the entire tree, alternately and by simply a change of focus.”

“We are God. Each of us, all of it. We are a tiny subset of It All, each of us. We are essentially It All … God … but we choose to be lesser at the same time … to have the experience of both … to better magnify the glory of it all. Or, as I like to put it, to make it more fun….”

– from “Funny God: The Tao of Funny God and the Mind’s True Liberation”

There Is No Sacred and Profane: “If Truth is God, then embracing what is, is equivalent to embracing God. No points for blind belief.” 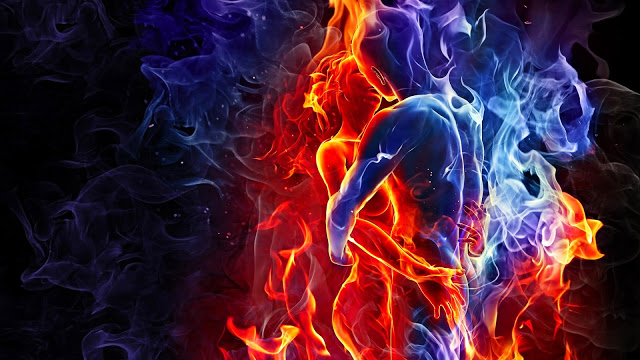 “…there is no sacred or profane. God includes it all … the sacred and the profane. If Truth is God, then embracing what is, is equivalent to embracing God. No points for blind belief. Life and spirituality are not all about trying to negate, or deny, one aspect of Existence, to will it out of Existence and magnify another. God includes it all. And that includes sacred and profane.

“…in larger awarenesses, those parts we call negative, like pain, are seen in larger contexts where they are put in a different, and positive, light. Where they magnify the glory of It All. Or … where they magnify the interest or adventure or the pleasure of it all, like salt to food … or the *fun* of it all … in the many ways that can be meant. And often, in ways that we are completely unable to see ahead of time.

“All the same, becoming more inclusive, having more participation, if you will, means becoming more like that Good, that Mercy, that Compassion, that Love that we find that God is in Totality.

“Yet, the fact that God is all these other good things is, looked at this way, a happy discovery. God is not what we need It to be … something that fills up the lacks or shortcomings we have … like some kind of fantasy to make us feel better. No. God is what is….”

– from “Funny God: The Tao of Funny God and the Mind’s True Liberation”

“People really making changes in male-female relationships…are struggling…. Our point of departure is a psychotic culture”: Wounded Deer and Centaurs, on relationships

…on relationships, Sure It’s Hard….” to think that it is easy is probably to be an impostor (p. 134). He asserts that the people who are really making the changes in male-female relationships and becoming fuller human beings, you can expect, are struggling to do so . . . that it is a difficult process and takes time.”….
from the new book, Wounded Deer and Centaurs. an excerpt: ………“Sure It’s Hard

“The Task Is Immense for Our Point of Departure Is a Psychotic Culture.

“The psychiatrist Theodore Isaac Rubin (1983), in his book on relationships titled One to One, points out that the divisive competitiveness and us-versus-them striving that we see predominating around us in Western culture is learned. He writes, “We compete, we fight wars, we are compulsively concerned about our hierarchical position relative to the next person, because we learn to be so through a psychotic culture passed on from one generation to the next” (p. 184).

“The point is that this is where we are coming from. Our point of departure is a psychotic culture or, as Erich Fromm (1955) put it, an “insane society.” Many of us are trying to reverse this violent and crazy trend, but it is understandable that it would be hard to make a 180-degree turn in orientation — from aggression to peace, from competition to cooperation, from fear to love. Therefore, our culture is gradually coming to the realization that we are involved in a difficult process, and understandably so. Our culture is starting to realize the immensity of the task we are undertaking in trying to change our inherited and deleterious patterns.

“To Think That It Is Easy Is Probably To Be an Impostor.”

“For example, Herb Goldberg (1983), a psychologist, points out in his book, The New Male-Female Relationship, especially in his section on “Transitions,” that to think that it is easy is probably to be an impostor (p. 134). He asserts that the people who are really making the changes in male-female relationships and becoming fuller human beings, you can expect, are struggling to do so . . . that it is a difficult process and takes time. In fact, Goldberg discusses at length his contention that real growth takes a lot of time and struggle, whereas “pseudo-growth” is the only kind of growing that occurs “overnight” and easily. (pp. 134-141)

“So not only does it take time, but we discover that it is hardly ever pleasurable. What most of us have discovered is that the path to bliss leads sometimes through despair and hopelessness. As Hesse (1965) described it in Demian: the bird, in pecking his way out of his shell, must destroy a world before discovering a new one. No, it is not often pleasant to confront some of the darkest things within ourselves, as we must do if we are not to continually project them onto others and onto the world around us…..

— from “Wounded Deer and Centaurs: The Necessary Hero and the Prenatal Matrix of Human Events” by Michael Adzema, soon to be released in print and e-book

We Are Stardust Sorta: Our very own experience gives us hints on the mind of God, for we are one with Her

“In finding out we are God, the same substance as God — which is Experience — we realize that we actually might have an idea of God’s “motives” or “reasons,” for lack of better words, for manifesting as physical reality, as humans. For we share them. We value them, too … as being good.

“…with this new understanding … that we are the same substance as God … we know our very experience gives us hints at the motives and intentions of God, and other higher entities.

“So, in fact, we can refer to him as funny, even. And to motives for existence that include fun, adventure, magnificence, and such. Interest, maybe. Who knows, maybe challenge?”

– from “Funny God: The Tao of Funny God and the Mind’s True Liberation“

for any of Michael Adzema’s books, go to http://www.amazon.com/Michael-Adzema/e/B00J7F0URC/ref=dp_byline_cont_book_1