Monsters, Vaginas, and Hairs, Oh My!

Recurring themes of monsters that eat one, for example, The Alien movie series, indicate the feelings of fear of death in the mother’s womb. This is often portrayed as a huge, threatening mouth surrounded by teeth and, sometimes, hair. This is a symbol found throughout the world. Social scientists refer to it as a vagina dentata “mouth.”

One most obvious portrayal of this was Steven King’s 1995 miniseries, “The Longoliers.” The monsters, shown at the end, turned out to be flying, ball-shaped vagina dentatas, complete with hair covering, as in pubic hair. Though Steven King meant this to be frightening, from the perinatal perspective these flying, attacking vaginas are absolutely hilarious.

Interestingly, the appearance of the Longoliers is caused by the characters going back in time. Though King has them going back only fifteen minutes, and not age regressing to birth, I thought the fact of time regression was telling in the extreme.

Time travel in general is indicative of the need to go back and fix the trauma of these early events. The Back to the Future series is merely one example. We all know many others.

We have Ever Increasing Cesarean Births

The perinatal roots of these movies are indicated in other ways, e.g., the baby alien, in “Alien,” being “born” out of the abdomen.

While a “baby” emerging from a person’s belly is obviously indicative of birth,

the fact that it comes bursting out of the belly, rather than the vagina, might also relate to the ever increasing use of cesarean section as a means of birthing in this century.

“Noah, How Long Can You Tread Water?”

Important perinatal influences are evident in the frequency of scenes of death by suffocation, in water or otherwise.

We are immersed in water before 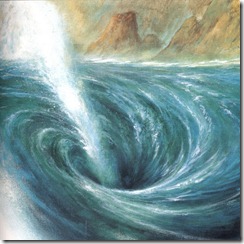 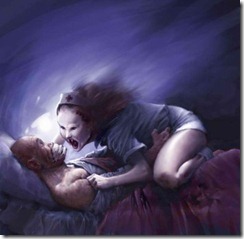 Near the end of gestation, the mother, when standing, constricts blood vessels to the fetus. This reduces the blood supply to the fetus and thus less oxygen is received. It is called fetal malnutrition. Prior to birth we humans experience suffocation and claustrophobic feelings—we “can’t get enough air”!—which seem deadly and unending. 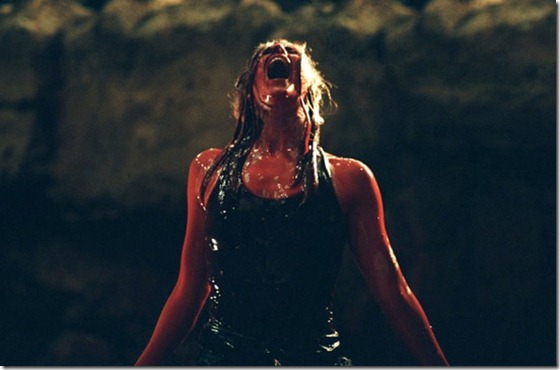 The timelessness of prenatal experience at this point—when not getting enough air—feels horrific, an unending nightmare. This part contributes to human ideas of places of forever, endless suffering, for example, hell.

I agree, but I don’t like having it “shoved down my throat!”

Very interestingly, a more recent addition to this complex has something being forced aggressively down the throat of the victim.

I have noticed an increasing frequency of this version of suffocation in the visual media ever since I first remember seeing it in a scene from the movie Alien, where a rolled-up magazine is used as a murder weapon by being forced into the victim’s mouth. It seems to be becoming a writer/director’s fad, as increasingly creative ways are being imagined to play it out in scripts.

Another common variation is when the suffocating item comes out of the person’s mouth.

In this frequent scenario, the victim is “infected” with some kind of alien spore which grows inside of him or her and comes thrusting up from inside of the person’s body and out of the mouth, lodging itself there. Often this alien extrusion looks something like a huge asparagus emerging.

The perverse sexual aspect of the image also has roots in perinatal, specifically, BPM III experience.

This “vegetable” eruption always happens suddenly and climactically, and almost always it results in death. Scenes like this I have observed in the movie “Jacob’s Ladder,” several times on the hit show The X Files, and in many, many other shows. 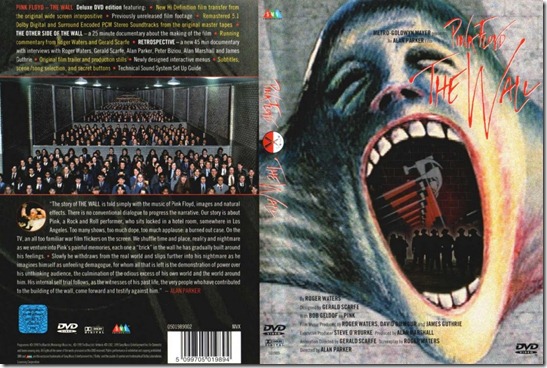 Gag Me With a Toxin.

This version of suffocation probably has its roots in the force-feeding of toxic elements to the fetus in the womb through the umbilical cord, and is more definitely related —the symbol is probably an amalgamation of both feelings—to the ungentle clearing of fluids 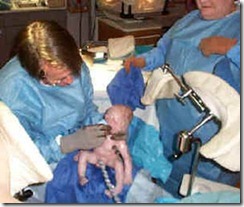 from the neonate’s mouth by the attendants immediately after birth.

This latter connection—the ungentle mouth cleaning of birth fluids—I can personally validate through my own primal experiences. Apparently I was not alone in being treated this way as a newborn in the 1940s and 1950s in America…hence its popularity.

Return to ET, Phone Mom – Of Aliens, Toothy Vaginas, Satanic Cults, and Explosions: Everything You Always Wanted to Know About Being Born