Kaleidoscope of Postmodern Life, Part Ten: Of Cigarettes, Lucifer, Prometheus, and Icarus—Why Humans Are Addicted to Burning Things … And Its Dire Prognosis

Sorry, Billy Joel, But We Did Start the Fire: Why Humans Are So Big on Burning … And Its Apocalyptic Prognosis For Us Today: 21st Century and Its Discontents, Part 10

Why Humans Are So Big on Burning

Humans did not always do things to adversely affect the air they breathe, however. We were not always fire burners or food cookers.

It is common knowledge that at a certain point in our evolution, we began harnessing fire for warmth, for cooking, and for other purposes, including entertainment. Consider that fact for a second…why are we the only species to do this? (And we are.) Now consider the aspect of our uniquely human fetal malnutrition as neonates and prenates we’ve been looking into. 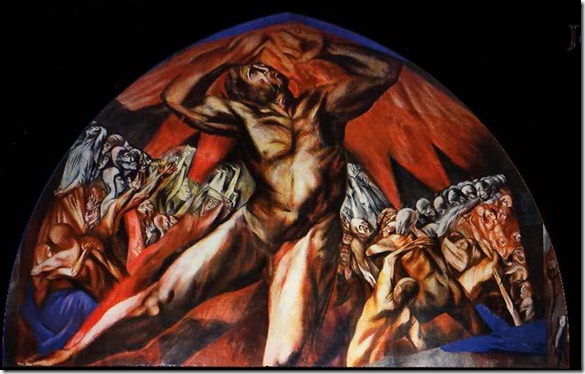 No other species needs to “burn” carbon-based fuels for survival; we only need a tiny amount of air to stoke our “inner fires” when converting food to energy. Yet we have added that incredible weight of setting things ablaze and burning fuels to our burden on the planetary resources and the environment ever since we began using fire. 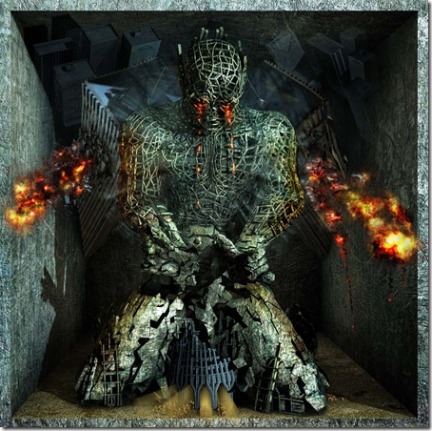 Consider if the fetal malnutrition/oxygen starvation we created for ourselves as unborns by standing upright might be manifesting itself as the need to burn stuff and thereby decrease the oxygen in our immediate environment, and increase the toxins there. Is it possible that fetal malnutrition, which is the result of bipedalism, contributed later to our use of fire? For, as I continually point out, we are triggered into our unfaced early pain, 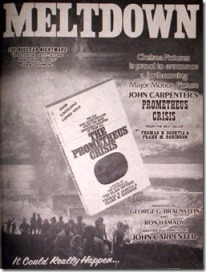 at the same time as we seek to run from it, while we unconsciously act to bring it about, so we might at some point face it and heal ourselves

(though we rarely do).

You think it a strange idea that we might be unconsciously wanting to re-create the “stuffiness” in the womb by burning stuff and creating air around us that mimics that state? Really?

Do you think it normal for someone to create tiny “fire sticks” and “suck” the bad air they produce?

Do you not wonder why we are the only ones to burn tobacco and other vegetation so we might inhale the exhaust from it, the smoke from the fire we

create? If we came across a culture where they built fires and stood around sticking their faces in the smoke to inhale it, how would we view that? How is cigarette smoking different? Yes, we are the only species that has that invention of cigarettes (cigars, pipes, hookahs….and so many more). And you think MY hypothesis odd?

Yes, Billy Joel, We DID Start the Fire

Is it any wonder we portray hell as one of eternal fire? Not only does it coincide with the prenatal feelings of burning on the surface of the skin, which I’ll soon explore in more depth.

But in that human beings are the ones being referred to when we speak of the myth of Lucifer; it makes sense that Lucifer’s home after being cast from heaven would be one of fire. Satan is always pictured in a “cave”—another womb symbol—of sorts with fires all around him. Humans compulsively create environments in which they are surrounded by fire. Just look around you…automobiles, heaters, electrical energy created by combustion…. 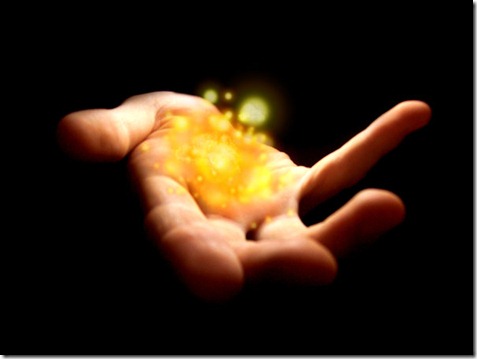 We also have myths that tell us alternately that use of fire is the great break with Nature that makes us humans, as well as myths saying that our being too reckless and getting too close to fire is what causes our downfall. When you think of it, am I not saying both of those? 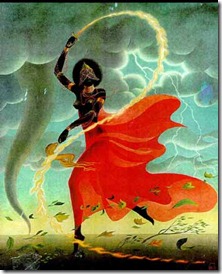 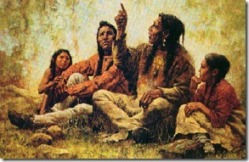 Many ethnographies tell of Creation Myths that include a hero that brings fire, therein getting things started for those peoples as a distinct culture. [Footnote 1]

In Greek mythology, Prometheus stole fire for humans from the gods and was punished by being tied

to a rock and forced to endure eagles picking away at his entrails for eternity… Maybe it is true that cooking food was not a great health step forward as many nutritionists schooled in naturopathy and wholistic health and enjoining about the benefits of raw foods have been pointing out. [Footnote 2]

As I’ve said, meat was the apple in the Garden of Eden and killing of planetmates was the first step in our downward slide into savagery. Since the primary difference that the use of fire made to the life ways of humans was allowing the cooking of meat—which 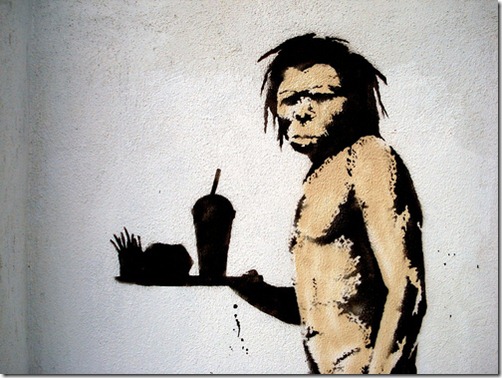 helped preserve it and made it more storable, perhaps this myth of Prometheus is also referring to that negative turn in our diet … and nutritionists will tell you that meat eating is the primary cause of all the gut ailments we have—colon cancer and the rest—and that a diet high in it correlates with a sharp reduction in the intake of roughage and fiber, with all their health benefits. 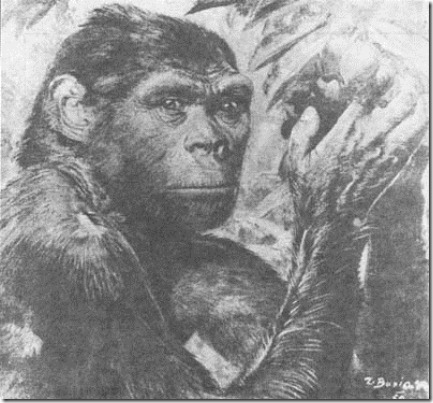 And sure enough, we find that the nomadic, foraging early humans left waste material high in roughage—of indigestible cellulose and vegetative matter. Indigenous societies even today have strikingly different diets than more “civilized” ones. Medical anthropologists long ago determined they eat so much more non-meat foods that the average time it takes for food to pass completely through their body is 24 hours, whereas it takes the average Westerner 72 hours for food to be eliminated. 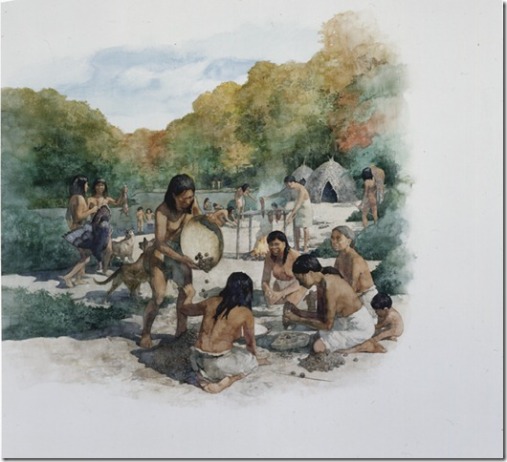 They view this difference as the main reason indigenous cultures have so much less colonic ill health than modern societies in which gut ailments are rampant. Perhaps the Prometheus myth is detailing where we took that wrong turn and the health consequences we were punished with thereafter.

And then there are the myths of being reckless regarding fire. One example, in a Greek myth, Icarus was given wings to fly, pasted on with wax. He did fly. But in getting too close to the sun…that big fire in the sky…the wax that held his wings melted, he lost his wings, and plunged to Earth and to his end. Might this not be a metaphor for so-called human “evolution”?

predicting the apocalyptic end we see before us, because of our misuse of fire of all kinds—the manic firing up of fossil fuels, the insane powering up of the atom for doomsday bombs and nuclear plants, and so on?

Continue with Why Humans Are the Sorriest of Species … Apocalyptic Foretellings Hidden in Myths of Eden, Prometheus, Pandora, Icarus, Cain and Abel: 21st Century and Its Discontents, Part 11

Return to People Are Already Dying Because of Oxygen Deprivation … Global Oxygen Loss Has Dire Significance Physically AND Psychologically: 21st Century and Its Discontents, Part 9

1. On the theft of fire and the beginnings of culture in world mythology:

From Prometheus in Wikipedia at http://en.wikipedia.org/wiki/Prometheus

2. Promethean parallels in other mythologies include

From Prometheus in Wikipedia at http://en.wikipedia.org/wiki/Prometheus

Regarding the the Norse myth, remember what was said in a previous post about one of the feeling complexes in late gestation being the discomfort of being in a toxic womb environment. I will discuss this feeling constellation in more detail in an upcoming post, where this myth will be even more illustrative.

Continue with Why Humans Are the Sorriest of Species … Apocalyptic Foretellings Hidden in Myths of Eden, Prometheus, Pandora, Icarus, Cain and Abel: 21st Century and Its Discontents, Part 11

Return to People Are Already Dying Because of Oxygen Deprivation … Global Oxygen Loss Has Dire Significance Physically AND Psychologically: 21st Century and Its Discontents, Part 9