“One goes through a shock, as the crutch of culture is removed … this message is the equivalent of the red pill for you.”

“There is hope in the truth, by definition”: What the Planetmates say on the Unapproved and Hidden, the maze, the matrix, culture, more….

“…culture proclaims, and it lies. Culture is the external manifestation of multitudes of Egos; it is the accumulation of their actions. Culture substitutes for the “instinct” — the natural in you that you have lost. And in inserting itself into all aspects of your lives it pushes away the possibility that you will ever feel that instinct arising in you or find your body and mind becoming whole, natural, healed. Culture provides the opiate for the dis-ease of humanness, as well as it covers up the dis-ease and precludes any cure.

“The Divine is Ultimate Truth. Whereas, culture is the societal embodiment of the separation from the Divine. Hence, culture contains some pretty a-mazing untruths and empty rituals. They are amazing because they are fantastical — colorful psychotic fabrications, if you will. But they are a-mazing also because they are manifestations of your confused and twisted consciousness and bring you ever back to the maze — in an endless trudge through labyrinthine passages of a journey that is ultimately futile, guaranteed for failure — which is your life.

“Now, that is something you did not want to hear, isn’t it? Indeed, this understanding brought by awareness of the Unapproved and Hidden reveals the horror of your life. It is a peeling back upon that which you do not, under any circumstances, want to know. It is an opening of Pandora’s Jar, seemingly releasing all evils into the world. Is it any wonder the Unapproved and Hidden has never — in all of your history — been known by you? By any of you? Is it any wonder the maddening explosion of culture you have created to keep it at bay?

“All that you see around you in society are in some way an outgrowth of the lies you tell yourself. For they are all perverted, backwards, bizarro distractions from your true reality. They represent endless meaningless activities that fill up the time, within which otherwise the truth could rise up in you; or they are the opposite constructions — the certitudes — upon which you stand and which are erected in exact defiance of the truth and reality.

“That last would include the falsehoods involved in all the ego-congratulations you do — an example being that you are the pinnacle of evolution and so have been “given” dominion over all of Nature. Another would be your belief in the materialistic nature of Reality, with its concomitant that it does not contain consciousness but that you — all-important, superior and wonderful you — do. They are certitudes that are the opposite of the truth, standing upon which and operating within which you are not able to even entertain notions of the truth.

“In fact, we would not be telling you this, revealing to you the Unapproved and Hidden of your human existence, if it was not both necessary as well as accompanied by an incredible message of real hope. There is, you probably know, hope in the truth, by definition. You may perhaps have already been feeling that. Certainly, it is better to let go of futile and wrong endeavors. Just refraining from the hopeless is hopeful in itself. It is better to take a few small steps in the right direction than to traverse a mountain that takes you where you will not want to end up. Those tiny correct efforts are far more valuable than a mountain of struggle and effort that ends in failure and abject frustration.

“Are you depressed? Hearing this? Did you think it would be easy looking into the abyss? Did you think that you would not find difficult that which billions of previous humans, back through history, were unable to do, because of its difficulty? Do you see the lengths to which you take your delusion of superiority? If not before, then now?

“We are revealing the emptiness below it all. For certainly, when you take all of your efforts and trace them to their roots, you find there is nothing there … like castles built in the sky is human accomplishment and culture.

“Some of you, in this most crucial of all times, have had revealed to you this mirage quality of your cultural constructions. It happens by various means — illness, tragedy, drug use, travel, and education, not the least of these — and only when you are ready. Chances are you are not reading this unless you have experienced it — this vision that ends your innocence, undermining your cherished illusions and false hopes. 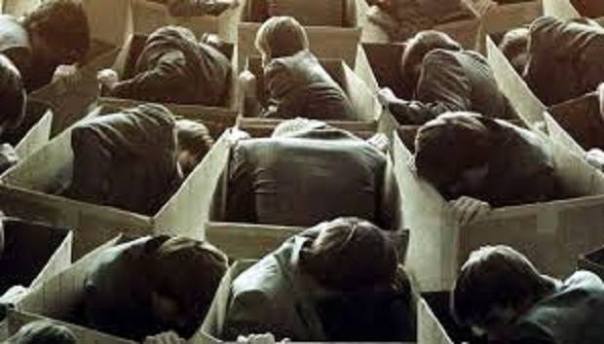 “Some of you call this collective mirage a “matrix.” Indeed, that term does describe the way your cultures substitute for Reality, making you unable to realize Reality or Truth, as well as providing the opiate for the feeling of unreality that results. Certainly, when one is reversing that trance state … indeed, right now, for you, this might be occurring … and this message is the equivalent of the red pill for you … one goes through a shock, as the crutch of culture is removed.

“Leaving aside the fact that in this space, this liminal one, your early deprivations can be felt and healed, still in the beginning this is a horrifying vision of unreality, emptiness, and meaninglessness. One feels that one is seeing deeply into the nature of reality and following it down to its foundations and they are … nothing. One might have the sensation of dissolving, of becoming de-atomized, or of melting. One certainly feels like one has lost all bearings and supports and cannot “hold oneself together,” any more. One might have that oh-so-dreaded feeling that one might be losing control of oneself, be going “out of control.” One might feel one is going to soar off into space, that having completely lost gravity and one’s connection to Earth one will be thrown or sucked back into an endless, random Universe. One often feels like one is falling….”

[Pt 4 of 27th prasad — Culture. More coming…
To see the entire book, to which this will be added eventually (book is two-thirds updated), go to  http://mladzema.wordpress.com/the-great-reveal-book-6/ … ]
Planetmates: The Great Reveal – Michael’s latest book — is now available in print and e-book format. April 27, 2014. at https://www.createspace.com/4691119
To purchase any of Michael Adzema’s books, available in print and e-book formats, go to Michael Adzema’s books at Amazon.
Those who want signed copies of any of my books, email me directly … sillymickel@gmail.com … Discount for blog subscribers.
Invite you to join me on Twitter: http://twitter.com/sillymickel
friend me on Facebook: https://www.facebook.com/sillymickel