Your Words Imprison You in a World of Swirling Mental “Bookmarks” of Reality, Keeping You Blind: The Fifth Prasad from the Planetmates (updated) 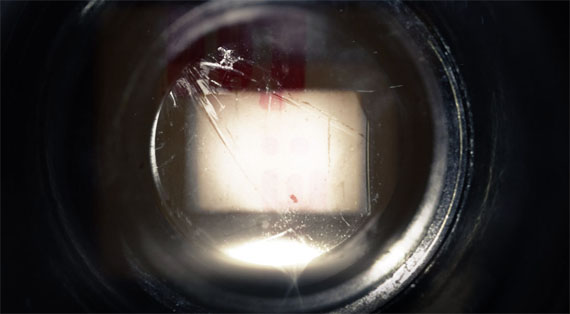 Your “Wordism” Is a Cave Prison: Planetmates Tell Us, Your Language Is an Aberration Causing You to Never Really Hear or Understand Each Other. 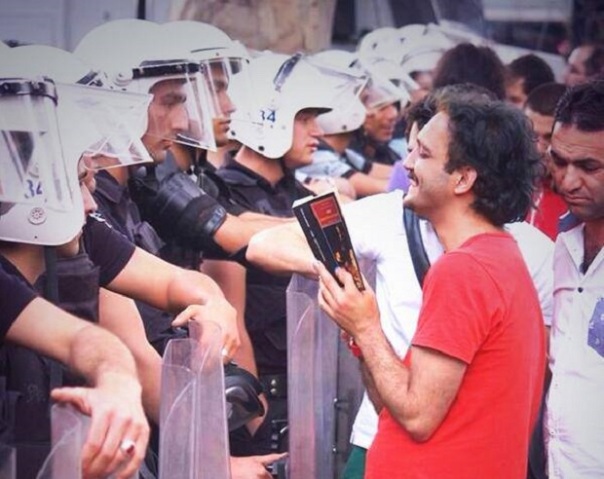 The Great Reveal from The Planetmates, The Fifth Prasad: Your “Wordism,” A Word Cave Prison 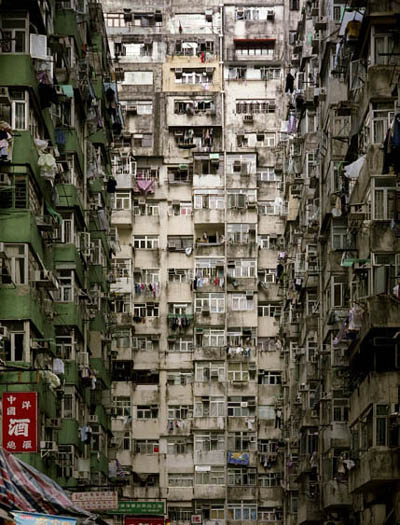 PlanetMates tell us “Your Wordism–is an aberration causing you to never really hear or understand each other.”

This is highly reminiscent of Plato’s “Allegory of the Cave,” imho. Especially, “your minds — suffused and distracted with a non-stop stream of non-sensical repetitions of word symbols – imprison and isolate you in a world of swirling mental “bookmarks” of reality, tagged to, but only dimly reflective of What’s Real, and keeping you blind to the wondrous reality itself in which other beings live in clarity of purpose and life meaning, and with direct intra- and interspecies and inter-entity communication.” 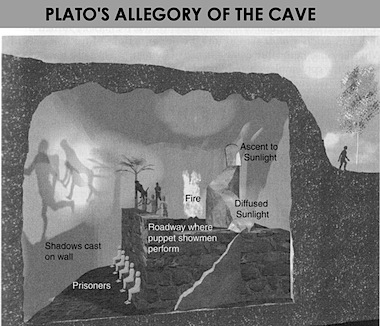 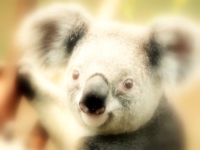 Koala is First Consciousness at The Fifth Prasad.

"[Your Wordism]...you misconstrue as a benefit in awareness, while actually it serves to cover up your lack of knowledge of your meaning or reason for being as well as the fear that abides with that." 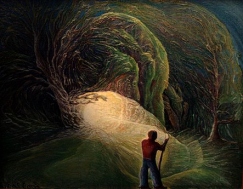 Your Wordism, for example — while actually an aberration, a flaw in your reality perceptors, causing you to never really hear or understand each other, let alone other beings or forms of life energy— is touted as a supreme accomplishment! Whereas, your minds—suffused and distracted with a non-stop stream of non-sensical repetitions of word symbols— imprison and isolate you in a world of

swirling mental “bookmarks” of reality, tagged to, but only dimly reflective of What’s Real, and keeping you blind to the wondrous reality itself in which other beings live in clarity of purpose and life meaning, and with direct intra- and interspecies and inter-entity communication. And this you misconstrue as a benefit in awareness, while actually it serves to cover up your lack of knowledge of your meaning or reason for being as well as the fear that abides with that.

What follows is a video of a reading of The Fifth Prasad, with commentary, elaboration, and context, by SillyMickel Adzema.

The link above takes you to the audio-only version of my commentary on The Fifth Prasad, exactly as is in the video. Click on the link to go the the audio site, or you can listen to it here using the audio player below.

http://ecdn0.hark.com/swfs/player_fb.swf?pid=txcnckwqbr
Image of The Fifth Prasad, Of “The Great Reveal” By The Planetmates 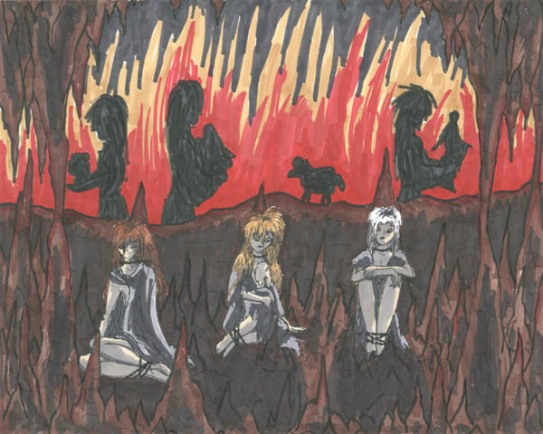 Paraphrase/ Elaboration of “The Fifth Prasad” — by SillyMickel Adzema

For example, you tout your Wordism, your language and the symbolic nature of your thought, as such an accomplishment as to raise you above the rest of Nature. You do not see what we do: distracted and confused beings unable to see or hear what is before and around them. This aberration from all other life we see as a flaw in your reality perceptors, causing you to have only part of your mind in the here and now and the other part somewhere else in constant struggle with and juggling an incessant stream of word symbols.

Indeed, much of that is not even what you might call thinking, for thinking is at least a directed stream, a linear, sometimes logically ordered, procession of word symbols. Rather, much of what goes on in half of your mind at all times is bits and fragments of sounds, words, phrases that you experienced most recently. They are nonsensically arranged and provide a background noise for you, as obvious and present as the sounds of traffic and the activities of city life and just as easily forgotten to be there. It is on that backdrop that you attempt to think and you engage your meager efforts toward taking in new information from your surroundings, including that which comes to you from other beings, human and otherwise. It is this hodge podge of disconnected fragments of experience, mysteriously raised up out of the stream of your experience because of their resonance with painful aspects of your past, which you in your dreams try to fit together, thus creating even more bizarre concoctions of mind even while at rest.

You say some people suffer from an attention deficit, when indeed you all do. All the magnificence of life when experienced by us when it is singular, when it is One Reality, is broken up and diffracted by you — like a prism breaking up the pure light of the sun — into a myriad of pale reflections of what is initially sublime existence. Your minds run round, from one thing to another, like peripatetic squirrels, never appreciating or fully taking in any of the stops along the way. In comparison to us, you appear to be acting blindly, often inconsistently if not completely without reason.

So, your mind is split in this manner. Only part of your attention is directed to the matters at hand and the people and their communications directly before you in the present. That is another reason why it can be said that you do not exist in the present: You sense life passing by “below” you … “below” your self, which is raised high, immersed in concept and under constant assault from trivia, and word and sound “salad.” 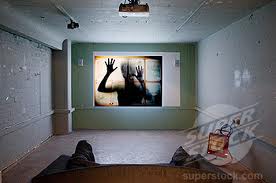 So, it is that you are imprisoned within your distractions. Even the word symbols you use are mere bricks in the walls of your jail cells, for they block you off from the world outside rather than illuminate it. You are like someone reading the tags on all the “presents” before you but never opening any. You are isolated behind this wall of swirling “bookmarks” of reality, which tell you that a world outside exists, though you rarely enter it. And these labels of Reality — a Reality which in the process of labeling gets broken up into parts with its essence, fullness, or “soul,” if you will, removed — naturally are a distant reflection from What Is in actuality.

Were you able — and in those rare cases, when you are able — to see magnificent Reality as we do, you would be, or are, terrified and cover your eyes and fall down in the face of it, unless or until you became accustomed to it. Our Reality is wondrous and full: Present experience, even if it appears from the outside as if we are simply staring off into the distance or dozing, is so much more entrancing and filled with delight, in comparison to your own diluted experience. So we are endlessly engaged and interested. When we are not engaged in purposive behavior, simply being in physical form is so rich and enticing that we could not imagine leaving off it or wishing for it to end, not to mention deliberately making it end on our own.

Beyond that, we have communications between each other — within a particular species but also with other species as well as with other forms of life energy your insanity makes you unable to even know about — which are complex and fascinating. These interactions that we have, as you observe them, are the tip of the iceberg of what is actually happening for us. But then you mis-observe and miscalculate the depth and expansiveness of each other’s of your experiences just as much as you do ours. There again, you have that tendency to placing all else below you. Caught up in your “catalog” or your “table of contents” of life and not the actual “stuff” of it, you not only miss out on the full experience of your own life, as you place it “below” your purview, but you do the same to the experiences of others of your own kind, and below even that you mis-appreciate the experience of life of us planetmates.

Of course, like in everything else of your misunderstandings, you have a sense of your experience of life being different from other species … you sense you are not “into” the here-and-now as they are. But then you go on to deem that another aspect of your superiority to us. You evaluate that disconnection you have with Reality as a benefit or advance over others’ experience. Yes, that disconnection allows you the illusion of manipulating and controlling those items of your Reality, but you have no idea what a paltry substitute that feeling of power and control is for the experience of direct immersion in those items and connection to and participation with them … regardless whether those items are, in your categories, “living” or “non-living.”

Of course, you prefer this prison to anything else. For, as always, you have a sense that outside of its walls lies a harsh reality … a harsh awareness of yourself. Outside of it, indeed, does lie the actual experience and feeling of your life, including all its disconnections because of your running from your experience and the dissatisfactions and discomfort of your early life. The fear of that awareness motivates all your actions of mind and behavior. You do not know the bliss and wonder that is possible for you were you to let those disconnections be healed, those fragments become completions as they are wont to, and were to exist in silent awareness, to simply be, without all the noise of them. You do not know the feeling of being aware of your reason for just existing and the fullness of undiffracted clarity and purpose we planetmates exist in continuously. You do not know of this possibility of a plenitude of experience that would be possible to you in time, though a part of you does. For you express it in myths, telling you of this wonderful place, this Garden, this Eden, that once existed for you. Indeed, it did, at your very beginning for you and a very long time ago for you as a species. It did exist and so could again for you. But, because of your insanity and your fearful retreat into a dark cave of words, you do not know that and would, of course, fear that knowledge if you heard it. 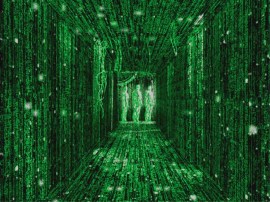 Continue with The Great Reveal from the Planetmates, The Sixth Prasad — Ego as Opiate

Return to The Great Reveal from the Planetmates, The Fourth Prasad: Origins of Ego

To Read the Entire Book, of which this is an excerpt … on-line, free at this time … Go to The Great Reveal from The Planetmates