← Better Off Than Fifty Years Ago? Part Eight: The Monopoly Game Again … It’s About Creeping Corporate Insertion Into Every Aspect of Your Life.
Kaleidoscope of Postmodern Life, Part Nineteen: Imprints for Paranoia, Sado-Masochism, and the Wicked Witch in Poisoned, Infected, “Bad Blood” Aspects of Fetal Oxygen Hunger →

But when you hear the same things again and again, even black-and-white facts can be put up for dispute. For example, during the 2008 presidential race and prior to Obama’s first budget the Democrats’ tax proposal was explained as a tax cut for the middle class and no increase on any Americans making less than two hundred thousand a year. This was a black-and-white fact, part of the public record, not in dispute. But how did the Republicans explain it?

We’re All Rich. Somehow I Missed That Memo.

So apparently we got a group of people who think that people are really rich. The assumption is that most Americans are rolling in dough so that any tax increase on the wealthy is an attack on all Americans.

Obvious “Truth”: The Democrats’ Want to Take Your Money.

The way this “obvious truth” is phrased now…no way to get around it, it’s a flat out lie…goes, “You can’t tax the very rich, cause that’s…” and they’ll just say it right out, “that’s gonna affect all Americans, that’s taxing everybody.”

Well how did it get to that conclusion when actually it’s going to lower taxes. And they were saying it over and over again, “No, we don’t even need to know what the plan is; we just know he’s a Democrat and that he’s going to raise taxes,” they would say of Obama…or for that matter of any Democrat at any time in recent history.

Now, how did that become true? Well because…he’s a Democrat and well haven’t you ever heard the term tax and spend Democrats? And there we go again.

Alright, let’s go back. Pre-Roosevelt turn of the century initiatives so common and familiar now, such as the Food and Drug Administration, are the kinds of things Democrats brought in that added to government. Yet, Republicans spout misinformation; they get people angry about “evils” of such “big government.” 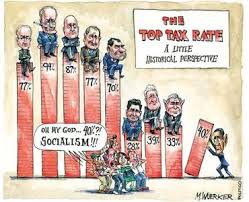 And we remember the Republicans are the ones who created the Great Depression, created poverty for everybody at that time. They’re the ones who did it again with Bush, who tripled and nearly quadrupled the National Debt under the twelve years of Reagan-Bush, then more than doubled it under George W. That’s a lot of goddamn money.

That’s a Lot of Money.

And then the Republicans were giving away seven hundred billion dollars to rich people who afterward were giddy in their ingratitude. This giveaway, keep in mind, came at the end of Bush’s terms.

And even afterward, all Congressmen were agreeing that’s a huge amount of money, which at the time

was the biggest amount of money being spent at one time, in such a short period of time on anything.

And how could we forget that they just took the money and did whatever they wanted with it? They paid off debts to other rich friends; they went overseas and invested in other countries.

Chase Didn’t Use the Money for What It Was Intended.

Goldman Sachs used sixteen billion of what it received to pay off an outstanding debt to a German bank. The head of Chase bank is known to have said he wasn’t going to use the money to increase credit. In fact, he said he was going to keep that money and he was basically going to feather his nest with it and keep Chase solvent so that when other banks went under he could buy them up with it. That’s the money of the taxpayers he’s playing “Monopoly” with, mind you.

But stacked up against the facts we have this idea of tax and spend Democrats. It’s been repeated, going back many decades. It basically goes back to Roosevelt who ended the Depression and benefited virtually all Americans. And now that’s somehow a bad thing, brought up to get you mad about the tax and spend Democrat. And they’ve got all Americans convinced that if you vote for a Democrat, they’re going to take your money, they’re going to tax it, and they’re going to spend it on somebody else. Well, that has nothing to do with the truth.

It has nothing to do with the truth. Certainly Roosevelt benefited all Americans with Social Security and so on; certainly Medicare, brought in under Lyndon Johnson benefited the vast majority of Americans. All these things the Democrats did.

And Clinton raised taxes on the very rich a few percentage points and balanced the budget. Clinton created jobs and prosperity, balanced the budget, reduced the National Debt, and created a surplus that could have gone into creating a better America for all Americans. But, no, that was considered bad, because they said it hurt all Americans when the extremely wealthy had to give a little more in taxes.

The Fun Times Anticipating the Surplus

Never mind the facts, never mind that fact that we had a surplus that we were talking gleefully about how we were going to spend it. If you can remember, we were discussing investing in better roads and infrastructure that would have benefited even the businesses.

But no, it wasn’t about the truth anymore, it was about how you made it to home base, how you got money for yourself.

And it didn’t matter anymore if you just skipped all the bases, and you started at home and went to home…if you just took the money.

I mean, after a while the Republicans could just do that; tax breaks for the wealthy just because they were wealthy. Because, after a while, after all those years of repeating it: They could get away with, If you tax the wealthy you’re taxing all Americans. Wow.

Continue with The Wealthy Are the Creative Sector All Right … Creative in Stealing Our Money: Money Madness … Foolin’ the People About Money, Part 2

Return to Corporations Crowding Out the Mom and Pops … HMOs Driving Out the Private Physician, It’s the Same Old Monopoly Game

The Rise and Fall of “Obvious Truths,” Part Three – an Audio Reading by SillyMickel Adzema

Here is an audio of the author’s impassioned reading of this part. Though it is of the first, unedited and unpolished version, and it does not contain all the detail of its current form below, it does capture the flavor of it all. I offer it here for your listening pleasure. For the reading of this part, “The Rise and Fall of ‘Obvious Truths,’ Part Three,” click on the link to the audio site above or click the link to the audio player below.

Continue with The Wealthy Are the Creative Sector All Right … Creative in Stealing Our Money: Money Madness … Foolin’ the People About Money, Part 2

Return to Corporations Crowding Out the Mom and Pops … HMOs Driving Out the Private Physician, It’s the Same Old Monopoly Game

← Better Off Than Fifty Years Ago? Part Eight: The Monopoly Game Again … It’s About Creeping Corporate Insertion Into Every Aspect of Your Life.
Kaleidoscope of Postmodern Life, Part Nineteen: Imprints for Paranoia, Sado-Masochism, and the Wicked Witch in Poisoned, Infected, “Bad Blood” Aspects of Fetal Oxygen Hunger →