← Atman Projects and Surrender Solutions – How can you be borne up if you won’t let go?
Moving the World – Don’t Expect to See it on the Cable News →

Joe Versus the Volcano

The different kind of heroic response, which characterizes the perinatal arena, is exemplified in another contemporary movie. In “Joe vs. the Volcano,” the main character, played by Tom Hanks, is given a heroic task. But unlike a typical hero’s cycle task which stereotypically involves the slaying of a fire-spewing dragon, Joe is asked to give up his life by jumping into a fire-erupting volcano.

The connection between volcano and dragon is that at the second-line or psychodynamic level the fire-spewing aspects of the perinatal, which might be compared to a volcano, can be seen as “embodied” or reduced in the form of a dragon. In the same way, the volcanic energy of perinatal feelings is initially embodied in easier-to-face and “dragonized” psychodynamic, second-line, or childhood traumas and feelings.

You Just Can’t Slay a Volcano 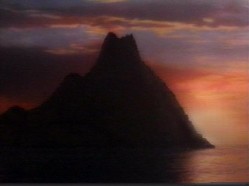 But what may seem to work at the second-line or psychodynamic level—the conquering or slaying of negative feelings…and notice that I said “seem”—has no place at all at the perinatal. For here the pain energy is overwhelming and pervasive. Thus the difference is analogous to that between facing the energy of a dragon and facing that of a volcano.

Keep in mind that this movie shows Joe, earlier on, going through all the major stages of the hero’s cycle—the retreat from mundane reality, the sailing off into a new and exotic realm of existence and adventure. 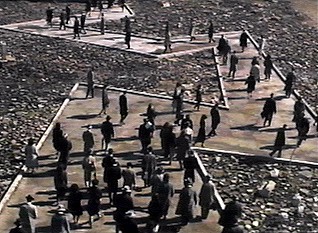 It even depicts a typical hero’s conquering of inner fears and risking of one’s life for another that results in the uniting with anima energy–the saving of the damsel. So earlier on there is a dealing with psychodynamic energy, just as in “Nothing but Trouble” Chevy Chase deals with psychodynamic material by risking his life to rescue Demi Moore from a giant chopping machine. But, also similarly, this results in the opening up of another level. Thus, in “Joe Vs. the Volcano,” Joe is asked to give up his life to save an entire community, not merely to risk his life to rescue his anima, his feeling self.

The ensuing plot has interesting elements as it shows Joe having to decide whether to sacrifice his newly won relationship with his anima ally for the benefit of an entire—but anonymous—community. This demonstrates that at a progressed level of the spiritual process—that having to do with one’s inter-connection with the larger community of living things, not just one’s personal unconscious—one must risk even one’s newly regained creativity, inner child playfulness, and personal feelings.

But in telling fashion, in order to make the higher “community” sacrifice the elements that have been let go of, symbolized by Meg Ryan as the anima damsel, end up going with Joe to his chosen fate and are borne up, renewed, along with him. 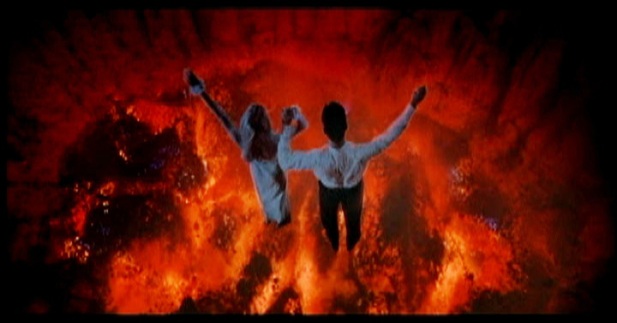 Borne Up by a Beneficent Universe

On Joe’s part, the climax shows the same quality of a beneficent Universe aiding a true and dharmic heart. Joe (with his anima) face what they think is death. Instead they find themselves “borne up” by the volcano, not consumed; and they are deposited (reborn) in a typical perinatal watery surround—the ocean, symbolizing therefore a spiritual birth.’ 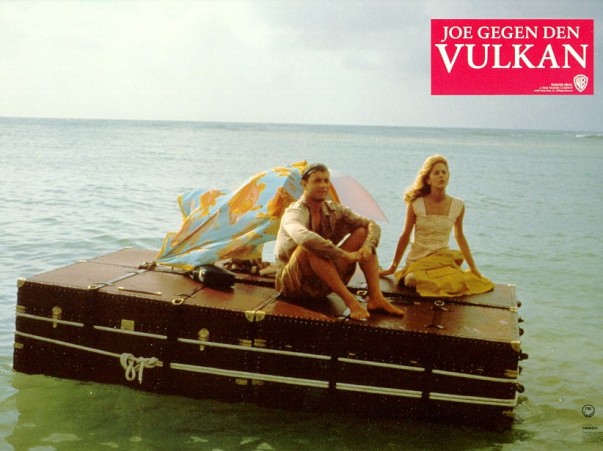 “Away From the Things of Man” 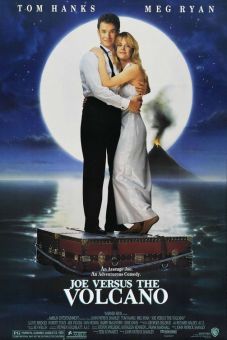 In the end, the main characters are floating in the middle of a wide open sea—signifying the immensity of potentiality that is now open, and facing a gigantic moon on the horizon—symbolizing the beneficent nature of the Universe to which they are opening, that is, it is beautiful and lit with possibilities.

They are seen sitting on only their luggage—symbolizing the “stripped down” nature of the self, that is, stripped of ego trappings of status, vainglory, defenses, and so on. Their final comment at the very end of the film is that they do not know where they’ll end up but only that it will be “away from the things of man”—indicating their desire to never go back to the drama of ego and its puerile catacomb pathways of darkened experience.

The Universe Is You

We see then that in this movie, like “Nothing but Trouble,” the heroic response required is surrender, not resistance or control, and that the response from the Universe is cooperative and helpful, and hardly antagonistic as was feared, especially at earlier levels.

This is in keeping with the discovery at the perinatal, which borders it on the transpersonal, that in fact the Universe, not only is not antagonistic, not only is beneficent and helpful, but in fact is no different from oneself, indeed is oneself…and one begins to wonder why one would ever expect not to be borne up by a Universe that is now seen as inextricably united with one’s Self.

Responses to the Perinatal

Returning now to “Nothing But Trouble,” an aspect of it that has significance for dealing with perinatal issues is the way different characters are shown responding to the embodiment of arbitrary justice, the judge. In the wonderfully Kafkaesque courtroom scenes, we see several different types of people—representing different responses to unconscious material—hauled before the judge. The musicians, signifying artists, creative people; the hedonistic criminals; and the main characters, representing average people, each present distinct attitudes, which are responded to differently by the representative of the unconscious, the judge.

Jiving With Your Monsters

The musicians are able to create rhythm and flow. Therefore they are able to get through the experience unharmed. Indeed, they are even able to elicit a response from the judge—getting him to join in. In this way we see how creative people can actually use perinatal material and get it to cooperate for desired ends. We might consider how this relates to the writing of “Nothing but Trouble” itself.

Peter and Dan Aykroyd, in creating this movie, are, like the musicians in the movie, getting the unconscious to “play along,” to create something beyond what either the writer or the unconscious could accomplish separately. Much of what is interesting in art is done this way: The deeper fear-evoking material is allowed to come in and enrich, enliven, freshen with new ideas and perspectives, stimulate, and invigorate the creative production.

On the other hand, the arrogant banker contends with evil, and, like Brer Rabbit with tar baby, gets stuck. Notice also that the really contentious ones—the alcoholic drug-using criminal hedonists—are completely lost. Thus the two extremes, as well as the average person are depicted.

But the truly striking element that indicates an advanced way of dealing with the perinatal material is shown in the genre of the movie itself. As a comedy, it shows a non-attached and transcendent approach. Chevy Chase and Demi Moore, especially Chevy Chase, show an aloofness and silly playfulness in the face of horror and death that has spiritual implications. Like a Tibetan mystic, Chase refuses to get sucked in to the involved drama confronting him. Like a Christian saint about to be martyred, he jokes, teases, and gets silly with the instruments of horror and evil. Similarly, Demi Moore humors and plays cards with her would-be monsters.

Standing within the Witness higher self, they are able to take the entire situation lightly—acting and reacting in the moment to each unique situation as it presents itself. One moment Chevy Chase is confronting his own demise, the next moment he is in a love scene. He alternates a frightful encounter with relaxing and smoking a cigar.

If we want to know what real and transcended behavior is, we might do well to get our hints in the depictions of unattached playfulness—as 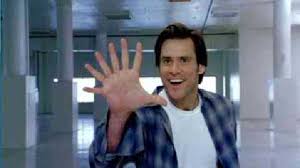 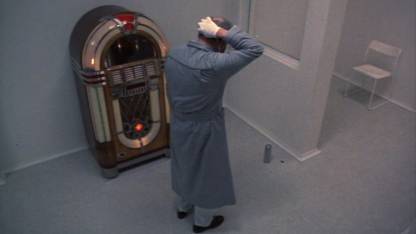 Incidentally, this element of humor shows an entirely different way of dealing with the perinatal than most other movies that deal with this kind of material. The movie, “Brazil,” is a good example of this difference. Not only is “Brazil” cast in an eerie, somber, and tragically hopeless and futile air—indicating that one’s response here is to “believe in” the reality of such material—but the only escape in this movie is in a purely conceptual, fantasy way.

The main character cannot face the horror ultimately. He flips out into a reassuring dream sequence brimming with BPM I and BPM IV imagery. Interestingly, reflecting the pattern of progression of our expressions in feeling therapies, the dream includes a BPM III scenario to get him to those later bucolic realms.

But in “Brazil” these are only day dreams. This fact shows a refusal to face this perinatal material or to surrender to it. Rather, in fantasy, one overcomes the horror. It is as if one continues using familiar ego techniques—hero’s journey methods, dragon-slaying methods—for dealing with material on a deeper level where they no longer work—where they are in fact counterproductive.

Thus, these techniques can only succeed in dreaming. Terry Gilliam, the creator of “Brazil,” shows us that the hero, in reality, is doomed. [Footnote 1]

Evolution In Attitudes to the Perinatal?

However, in “Nothing but Trouble,” the main characters do face and deal with all the material. Sometimes they fight it; sometimes run from it; sometimes play with it; sometimes joke, tease, spar, or get silly with it; sometimes are swallowed by it and carried along…but always they are creatively facing and dealing with it. This different air about and attitude towards the perinatal material can be said to be an advance from the earlier movie, “Brazil,” representing perhaps a progression of our collective consciousness in our attitudes and manner of dealing with the perinatal.

Dancing Above the Dissonance

Such a prospect is, indeed, the auspicious legacy of such a creative project. Though it is doubtful they did so consciously, the Aykroyd brothers and the producers of “Nothing But Trouble” deserve our gratitude for their efforts in lighting forward our collective reality endeavor.

Beyond that, we can take hope in the possibility that Western culture may be rising itself, however minimally at first, above the dramas of light and darkness that have plagued it for so long. The Manichean tendency can lead only to ever-spiraling cycles of resistance and assault. Yet we are seeing currently, not only an erosion of defiantly uni-dimensional ego perspectives, not only a movement toward facing and dealing with our inner darkness, but an integration of opposing forces, a dancing above the leela—the play—of light and dark.

The Universality of Divinity Remembered

The perennial understanding of the universality of divinity, both within and without us, in the lowest as well as the highest of places, is the bright at the center of the perinatal bedlam about us. We are guided as well by this gleaming, a rising moon of promise and possibilities.

Continue on this site with
Apocalypse – No! Chapter Eighteen:
To Move the World – A Race Against Time 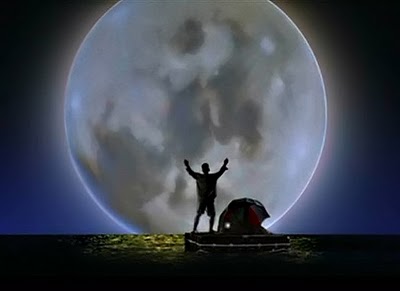 1. However, one might interpret the main character’s escape into fantasy as a victory over evil forces. That the ending lends itself so readily to such an interpretation is a telling indictment of the state of progress of some of us in dealing with perinatal material. Apparently, there are those so lost that the only success possible seems to be in insanity or death. [return to text]

Continue on this site with
Apocalypse – No! Chapter Eighteen:
To Move the World – A Race Against Time

← Atman Projects and Surrender Solutions – How can you be borne up if you won’t let go?
Moving the World – Don’t Expect to See it on the Cable News →